A restored WWII CG-4A Glider Nose Section is on the museum gallery floor for display. CG-4A Glider parts are very rare and the museum is fortunate to have this restored artifact for the public to enjoy. Note the 1/6th scale CG-4A Glider hanging above the nose project.

The CG-4A Glider Nose restoration project calls for lots of pulleys to be installed in the cockpit area. The museum purchased the correct stock items from an aircraft parts supplier for the installation of the three sizes of pulleys and cable. The original pulleys were in bad shape so the same stock number is available today. They also fit DC-3s. 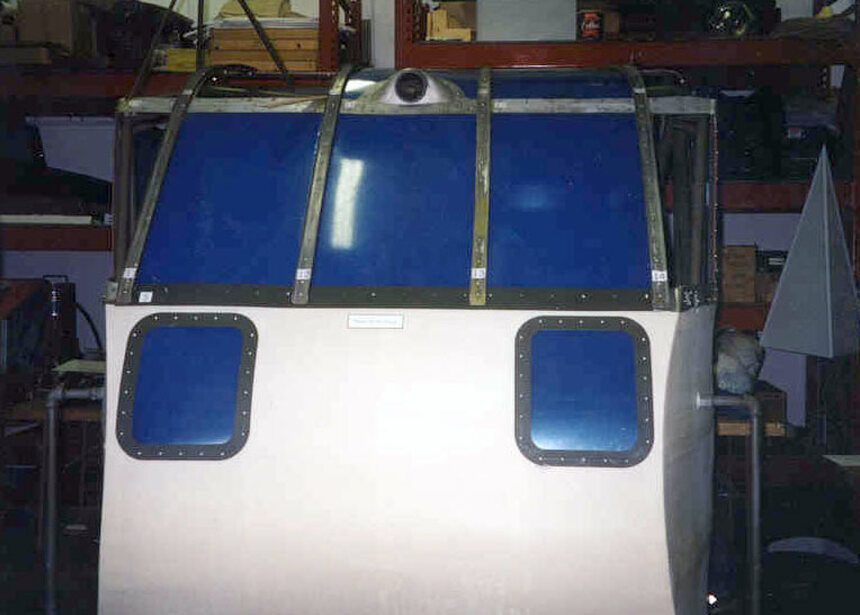 The CG-4A Glider Project before the painting phase. The blue windows on the glider photo on the right is not the color of the windows. It is sheets of plastic covering to protect the Plexiglas during restoration and painting. 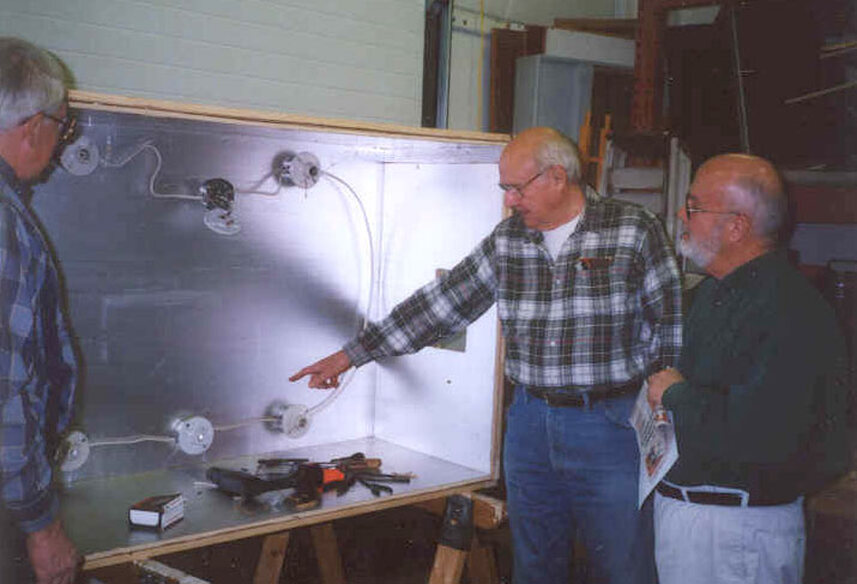 Museum Volunteer and Glider Project Coordinator, John Walter points out the workings of the Plexiglas heat box for glider window production to Harry McCawley of the Republic Newspaper and friend of the museum. Harry has written many articles about the museum over the years. 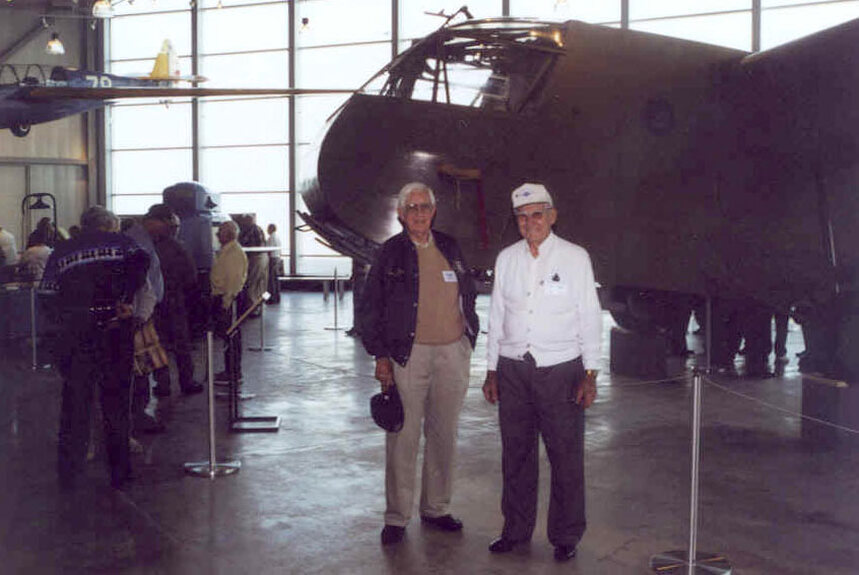 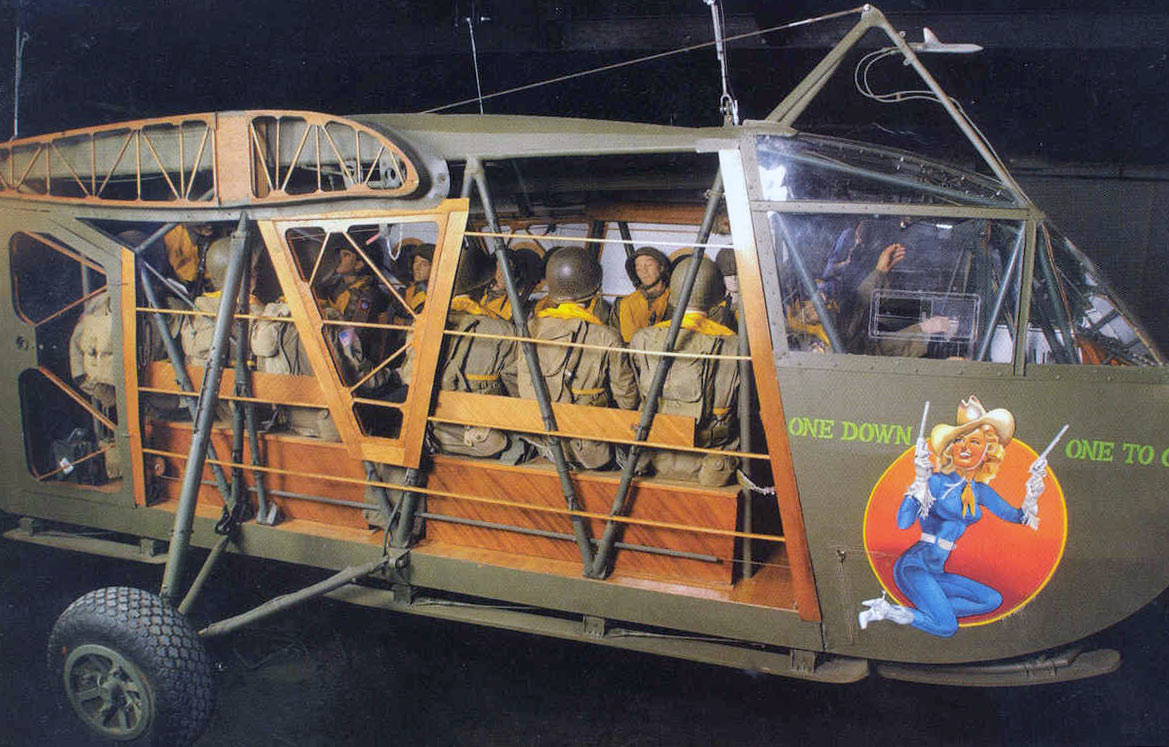 Thanks to Glen Russo of Clifton, New Jersey for his donation of CG-4A Glider parts. Glen donated bench seats, escape hatch, jump seat, and seat backs from a CG-4A Glider. The artifacts were found in the attic of a farm house in the Pocono Mountains in Pennsylvania. These artifacts are now on display at the Atterbury-Bakalar Air Museum thanks to Glen. You can see how glider bench seats and backs were used in the glider in the photograph above. 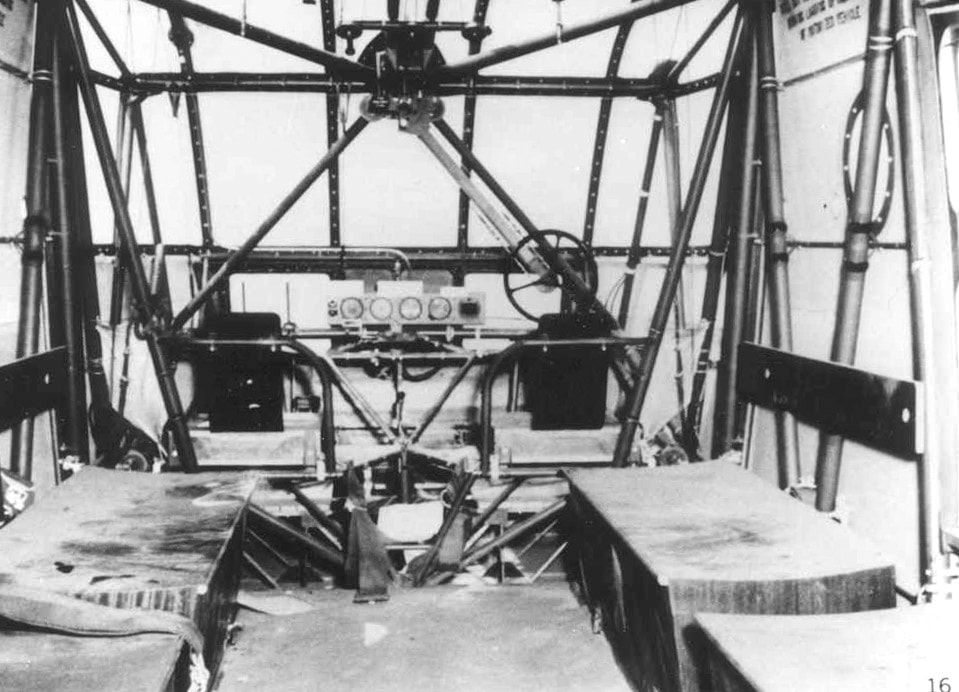 The CG-4A nose section in the museum's workshop.

A fully restored CG=4A Glider parked under the Columbus Airport Control Tower during a visit to Columbus. 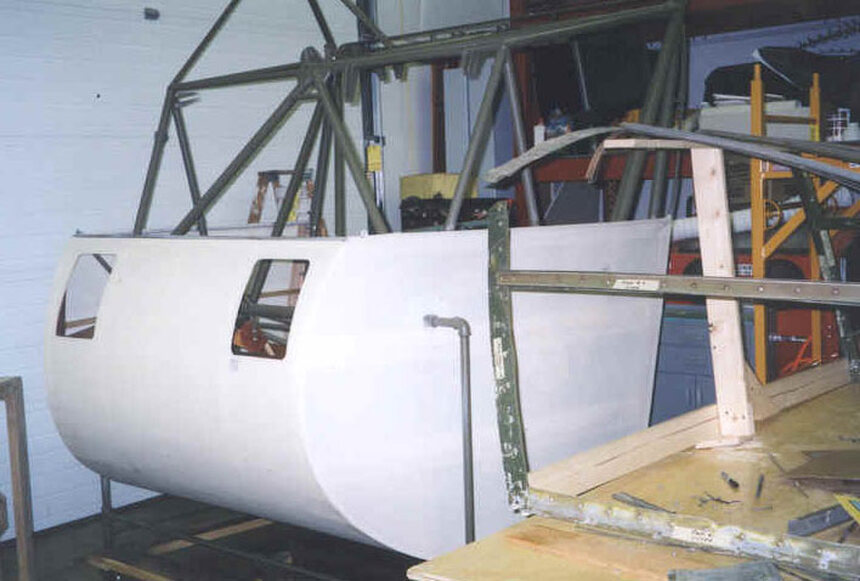 A photo of a CG-4A nose section. 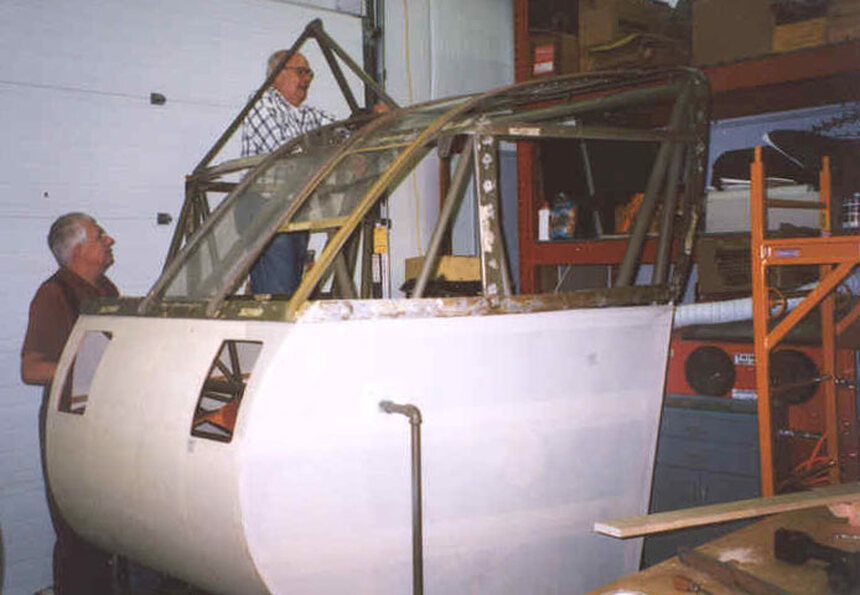 Attaching the CG-4A canopy to the glider frame. The fabric covering has been completed and will soon be painted. The basic interior is complete soon to have the controls and instruments installed. The museum workshop is named "Walter Works" in honor of John Walter's expert contributions to the museum projects. 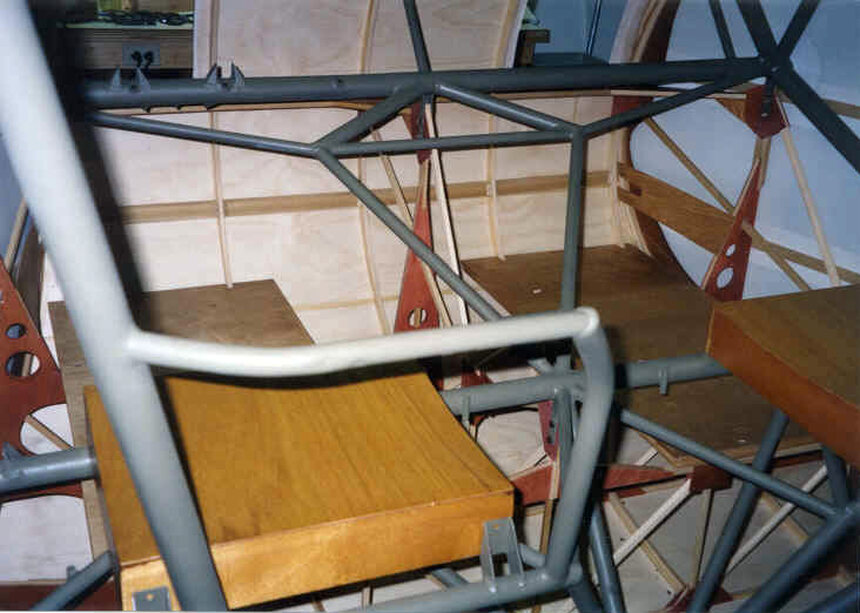 Note the fine woodworking and fabric reconstruction in the interior view. All the wood and coverings was done to original specifications. The metal parts were completely stripped, straightened, primed and painted.
PHOTO TO COME
John Walter and John Hodel pictured working on the CG-4A nose section project. Additional parts were retrieved from the St. Louis area including an almost intact cockpit window section. Part of the nose section seen in this photo is sitting on the floor pointed up with the bottom being held by John Hodel. This portion will be covered with special plywood as in the original construction with the window section on the other side where John Walter is working. Picture the section from the photo at the bottom of this page. If you would turn that picture nose up it will give you an idea of what they are working on.

The museum volunteers are currently rebuilding the nose section of a CG-4A Glider for display. This long term project will take many hours of painstaking work as every part has to be rebuilt or refinished by hand. As you can see by this page from the CG-4A Glider Manual the many parts on the table in front of Bruce Dalton, WWII Glider Pilot, the amount of work needed to rebuild the glider nose section. Museum volunteers, the 95ers, in the workshop at the museum going over the glider blueprints and detail work for the restoration project.

Photographs of the CG-4A Glider nose project showing some of the reconstructive wood working and a CG-4A cockpit window work project. 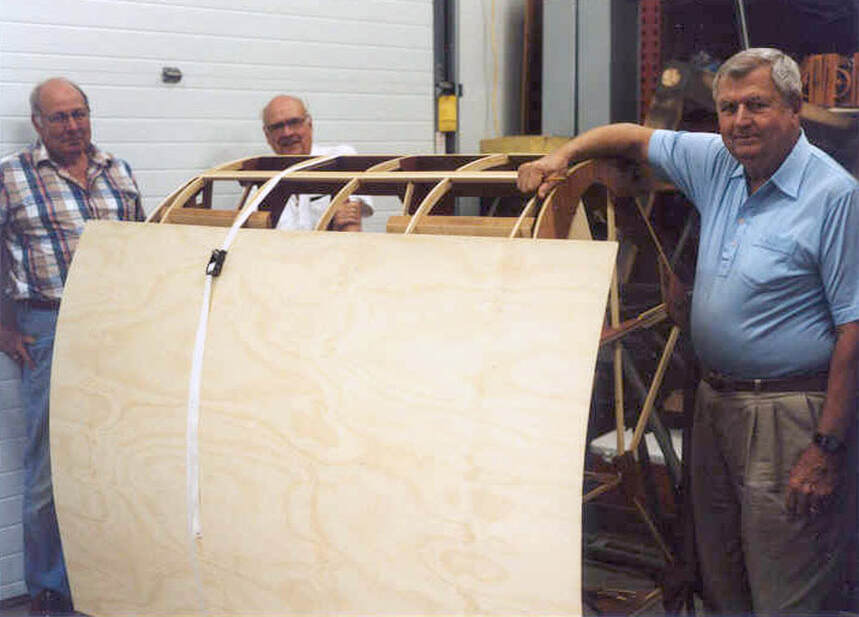 Photos by the volunteers. 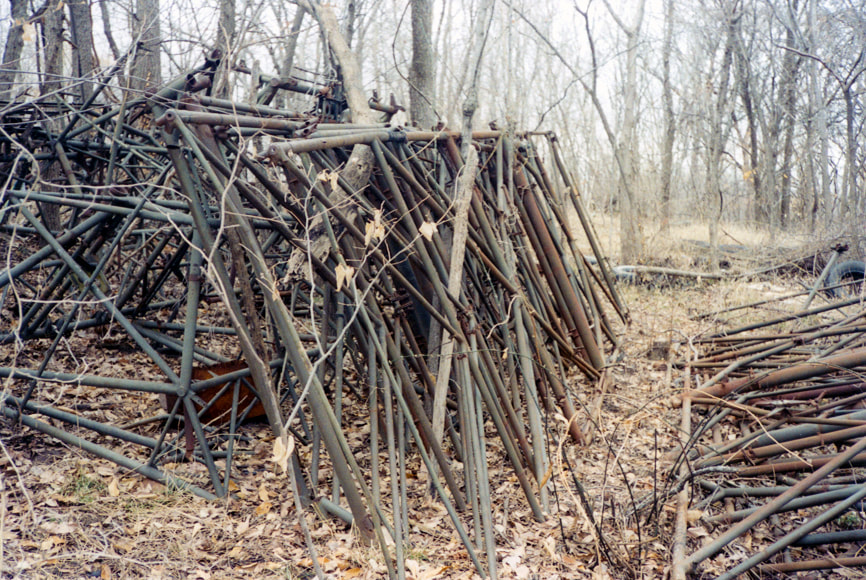 This photograph shows some CG-4A Glider main sections in the glider graveyard. Note the tree growing through the framework. All that's left of the CG-4As is the tubing that formed the main body of the glider. The museum staff visited this glider graveyard located in the Kansas City area to recover some parts needed for the museum restoration project.

What a shame! What a waste! All the glider fabric and wooden parts have long since rotted away and all that remains is the cut up center sections of the CG-4A Gliders. There is no price that can be put on a fully restored CG4A Glider today. More CG-4A Glider graveyard photographs.Look at the beautifully restored CG-4A Glider at the National Museum of the United States Air Force pictured below and try to imagine the many gliders that this glider graveyard represents.

CG-4A Glider as displayed at the National Museum of the United States Air Force
Do you have any CG-4A memorabilia, parts, manuals or photos to share with our museum?
The museum is looking for photographs, equipment, parts, manuals and related CG-4A Glider items for donation to the museum. If you served at the base and wish to add your personal accounts of service, photographs, and memorabilia to the museum archives and display material, you may do so by contacting the museum.