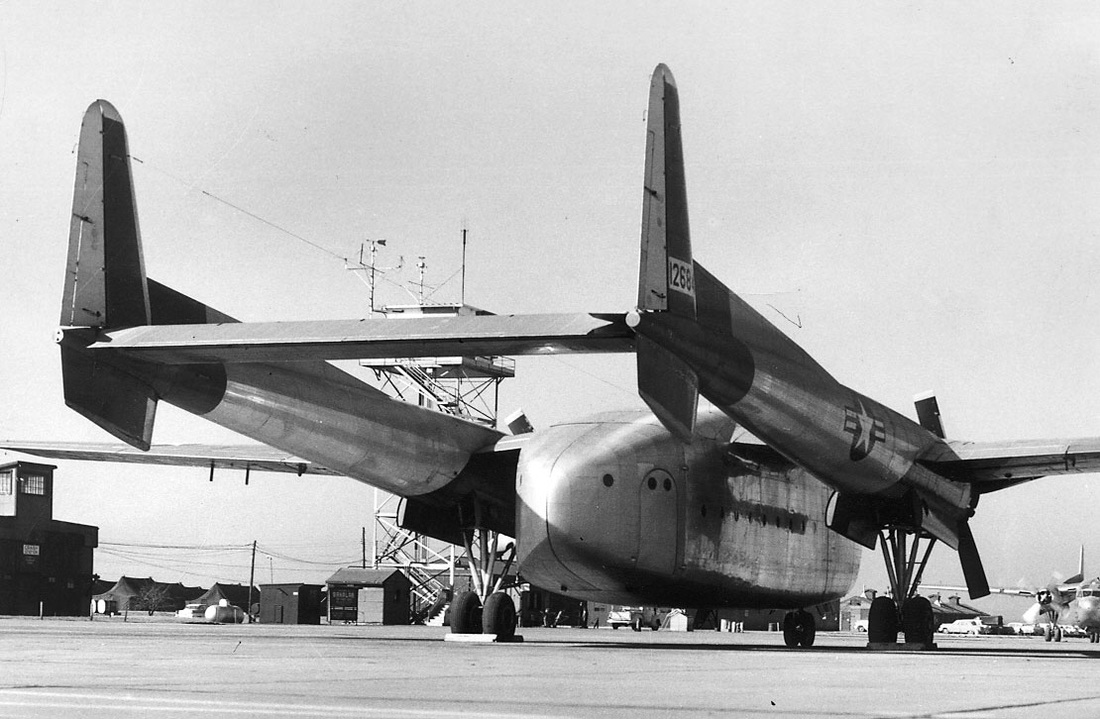 C-119G at Bakalar Air Force Base Columbus, Indiana near the control tower. Note the troop tents in back of the tower. 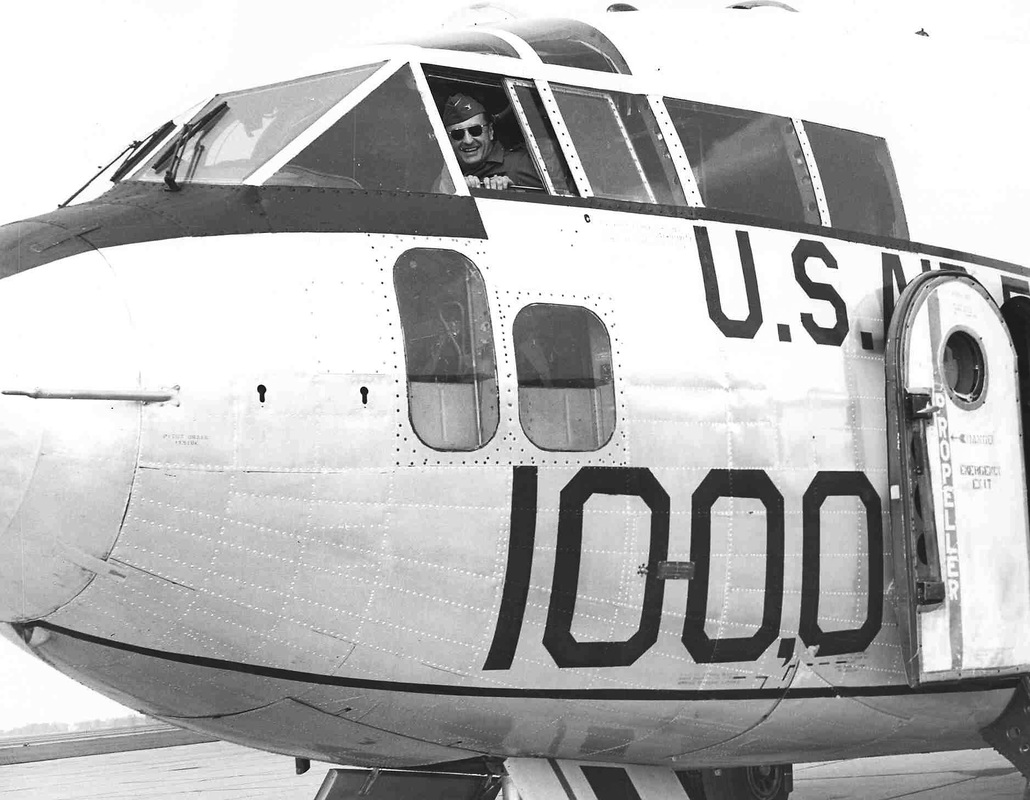 Colonel John Hoff in the cockpit of C-119 #100,000 - renumbered to reflect one hundred thousand hours of accident-free flying. 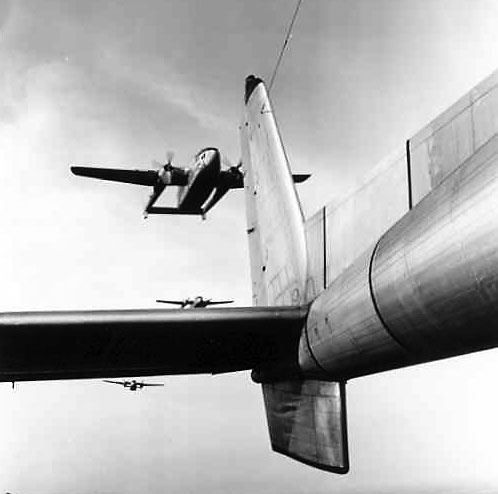 A great photo taken out of the back of another Balakar Air Force Base C-119G, of a trailing C-119G. 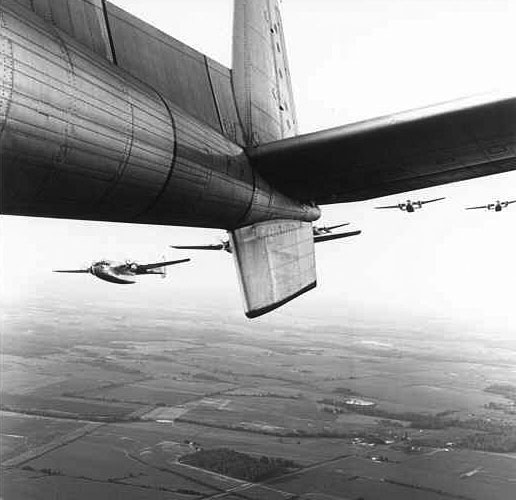 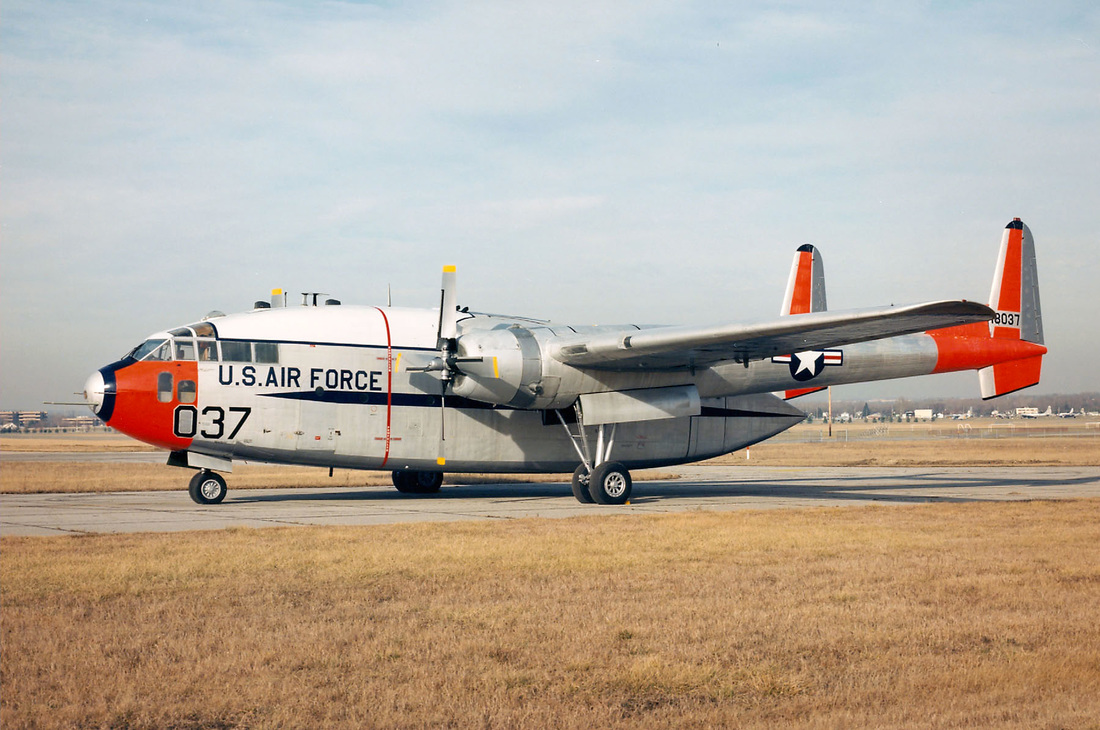 Major General John Hoff flew C-119J #037 to Wright-Patterson Air Force Base to turn over the aircraft for display at the WPAFB Museum. According to General Hoff, this flight took place most likely on November 2, 1963, according to his Form 5 records. Around that time, General Hoff had a number of flights in C-119s. He had two flights in the J model with one of just 20 minutes and the other on November 2, 1963 of sufficient time to fly to Wright Patterson Air Force Base (WPAFB ). The other flights were in G models. The 434th had one squadron of C-119Js for a short period of time before they were withdrawn from the Air Force inventory.

The C-119J #037 on display at WPAFB was specially modified for the mid-air retrieval of space capsules re-entering the atmosphere from orbit. On August 19, 1960, this aircraft made the world's first midair recovery of a capsule, returning from orbit when it "snagged" the parachute lowering the Discoverer XIV satellite at 8,000 feet altitude 360 miles southwest of Honolulu, Hawaii.

Photographs used with permission of the Strategic Air & Space Museum. 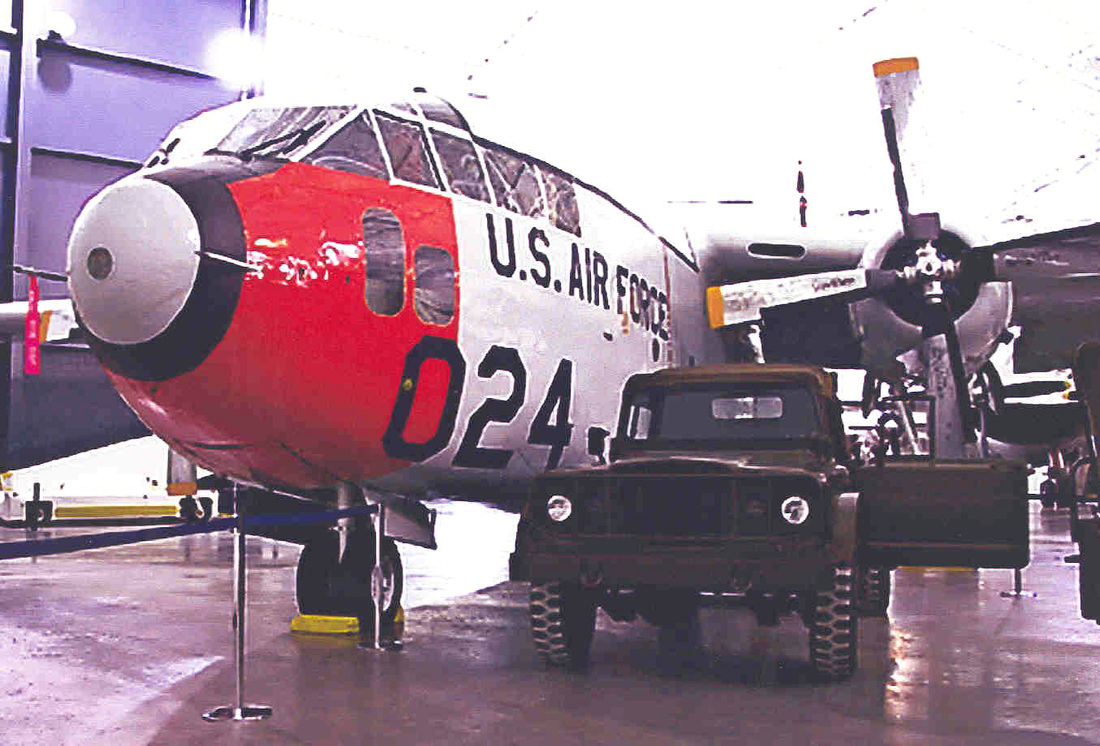 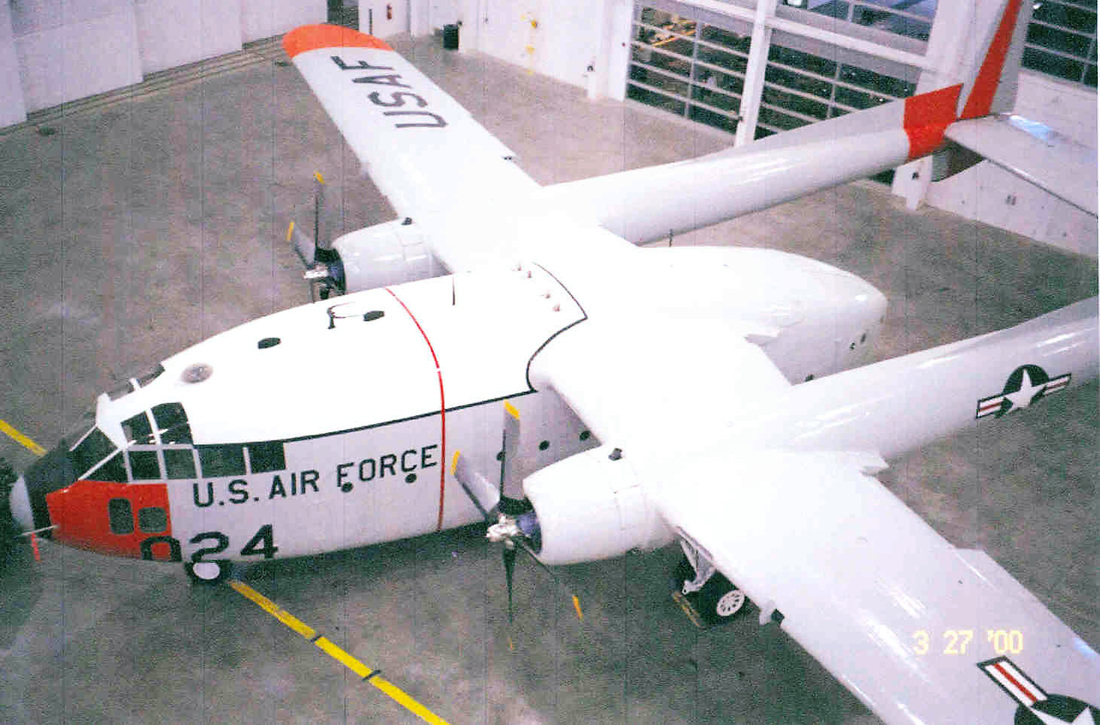 There were a total of 1,151 C-119s built, with 484 of the C-119G model. C-119G serial number 51-8024L was assigned in July 1957 to the 2466th Air Reserve Flying Center US Air Force Reserve Bakalar Air Force Base Columbus. After assigned to Tinker AFB, Oklahoma, it was assigned in January 1961 to the 434th Troop Carrier Wing Bakalar AFB and in May 1963 to the 930th Troop Carrier Group Bakalar Air Force Base. It was then assigned in June 1968 to the 71st Air Command Squadron (TAC) Lockbourne AFB, Ohio. In March 1970, it was dropped from inventory by transfer to the Strategic Air & Space Museum. 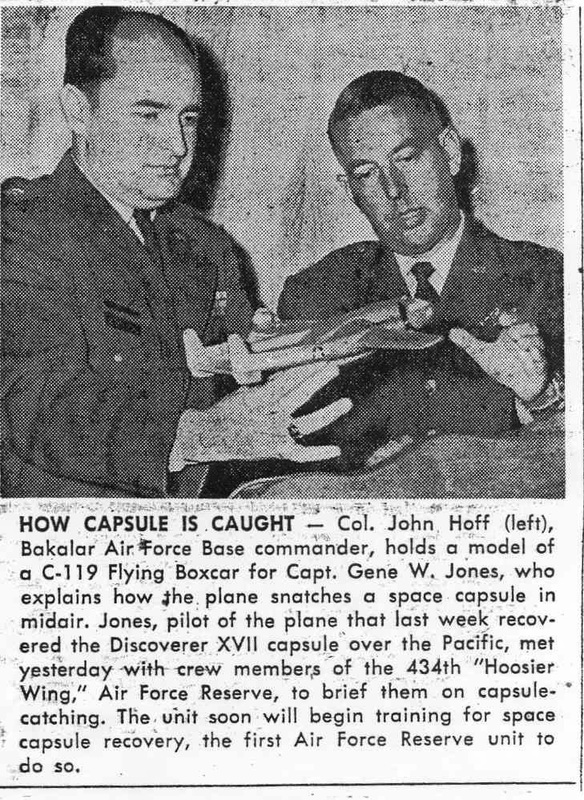 Major General John Hoff then Colonel Hoff, Bakalar Air Force Base commander being briefed by Colonel John Jones about the 434th's capsule-catching mission. Colonel Jones was the pilot of the C-119J that recovered the Discoverer XVII capsule. 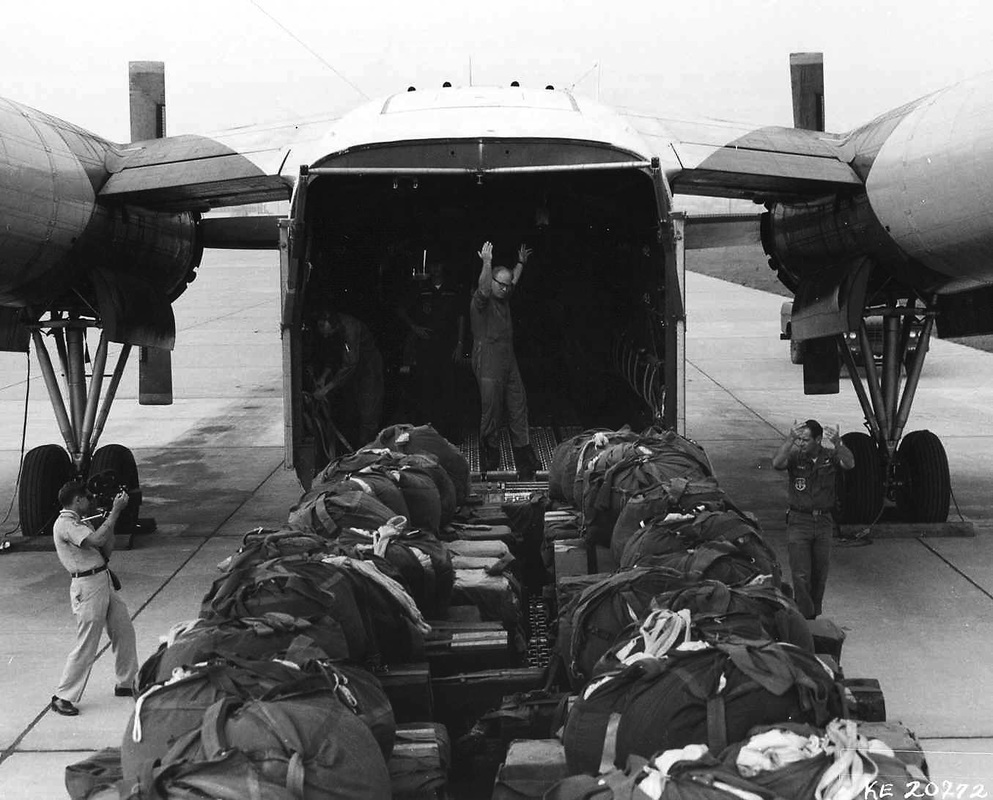 A 434th C-119 being loaded for an improved serial delivery system named "Alamo Slingshot," that was tested by the Air Force to enable Air Force cargo aircraft to re-supply ground units with almost pinpoint accuracy. With the slingshot system, the C-119 aircraft could catapult its complete cargo load from the plane in just four and a half seconds. This official U.S. Air Force photo was released  August 1966. 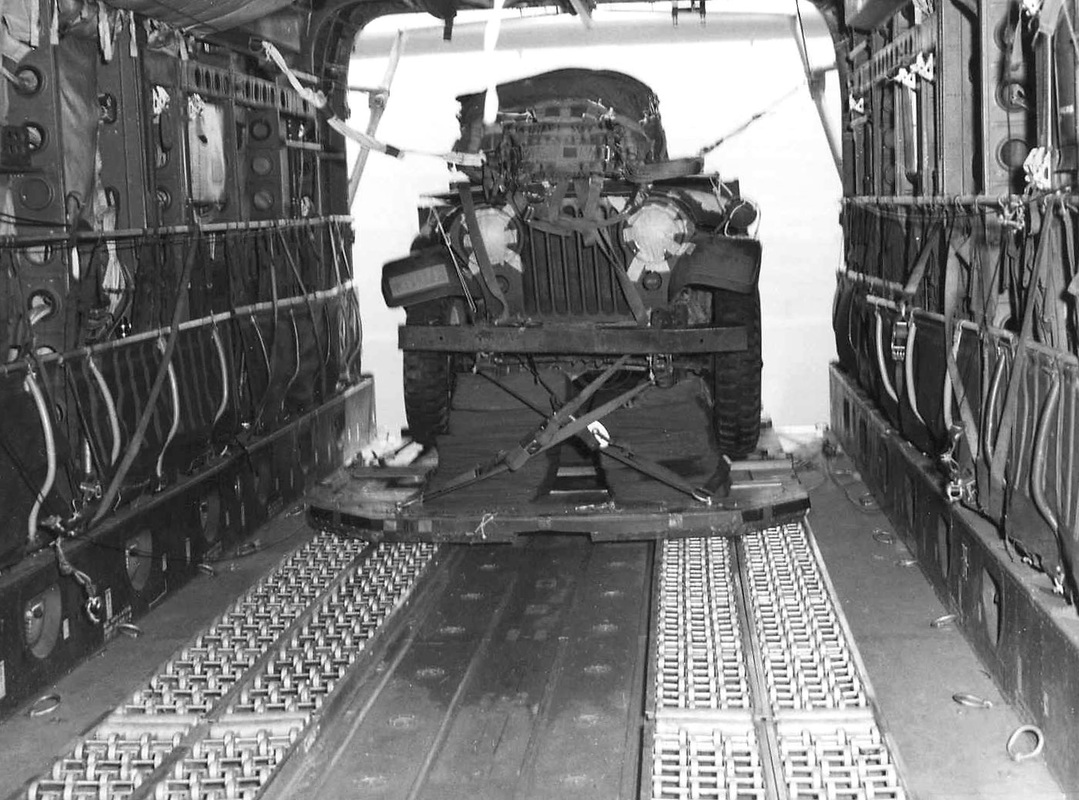 This jeep is being "Alamo Slingshot" dropped by a C-119 aircraft. This system allowed the paradrops from lower altitudes of from 400 to 1000 feet.

Equipment drop from a C-119G 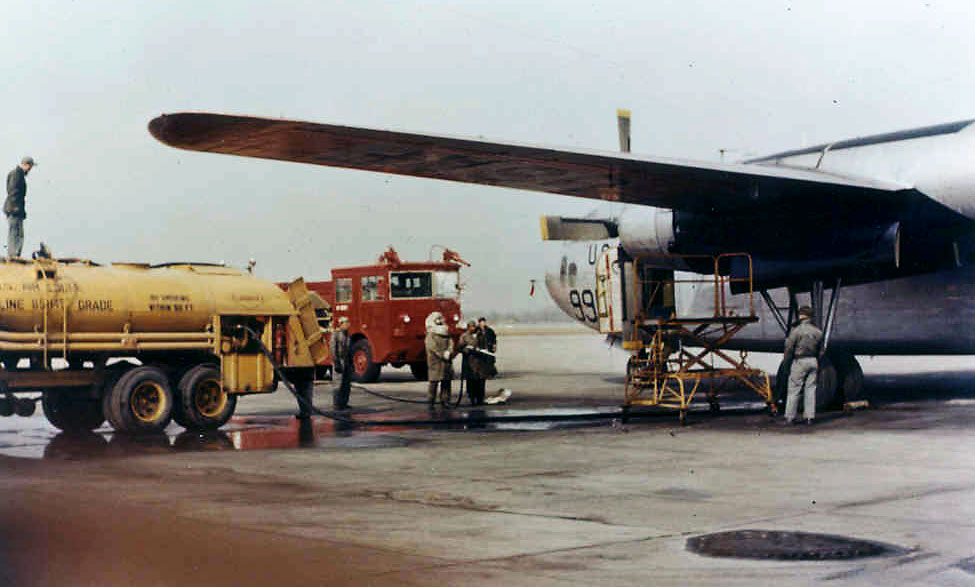 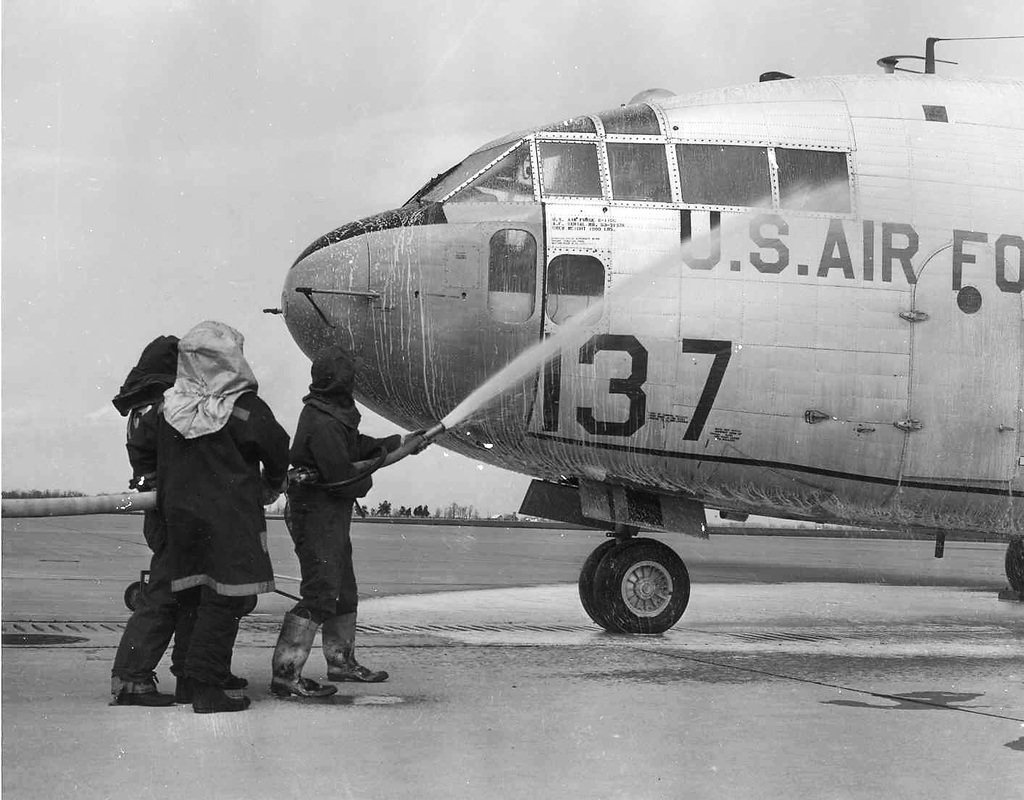 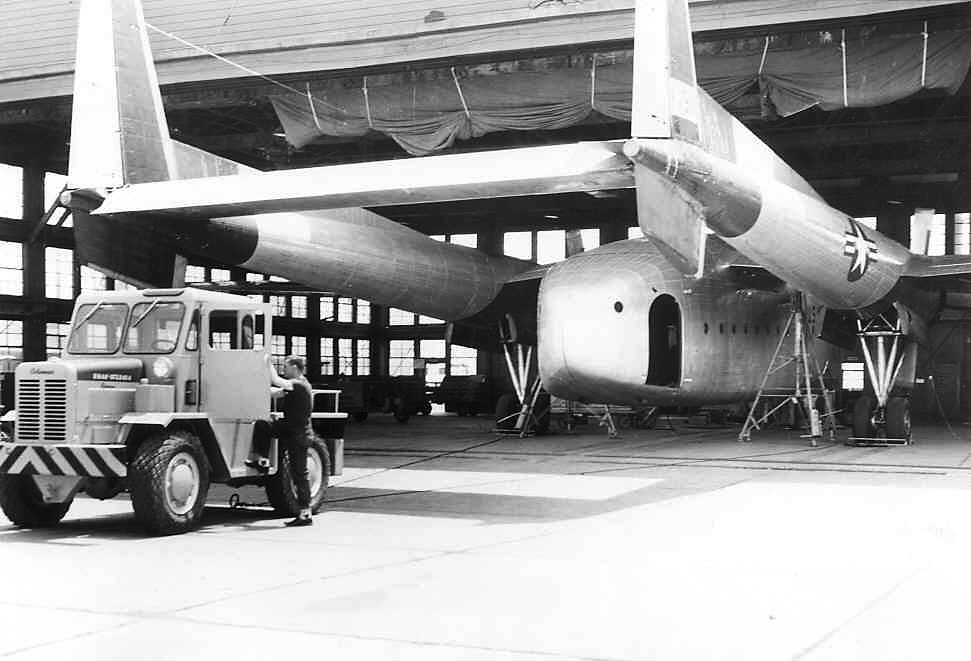 Many of the photos on this museum web site are stamped with Air Force Photo on the reverse side. 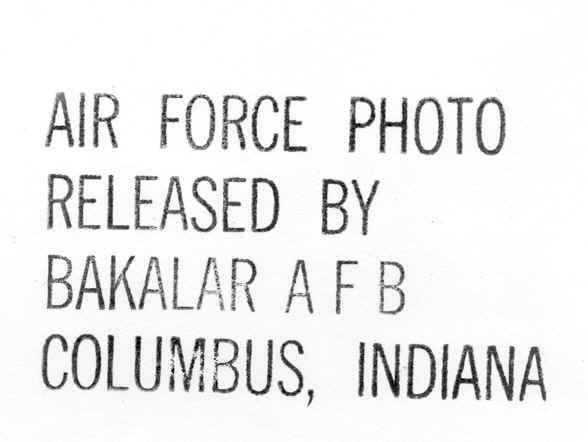 Have you seen any C-119Gs or C119Js on display anywhere? Let us know where and their aircraft numbers? Send us your photo and information. Or e-mail to the address below.

Send your questions or comments about this web site or the museum to:
abmuseum@att.net
Atterbury-Bakalar Air Museum
4742 Ray Boll Boulevard
Columbus, Indiana 47203