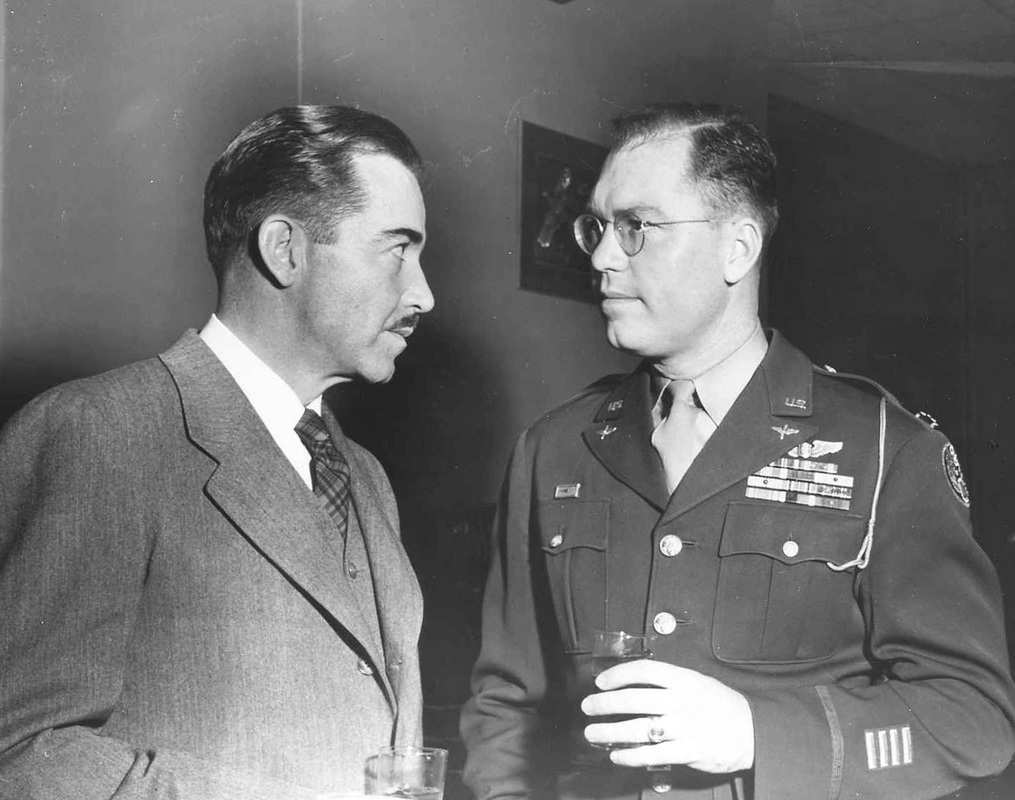 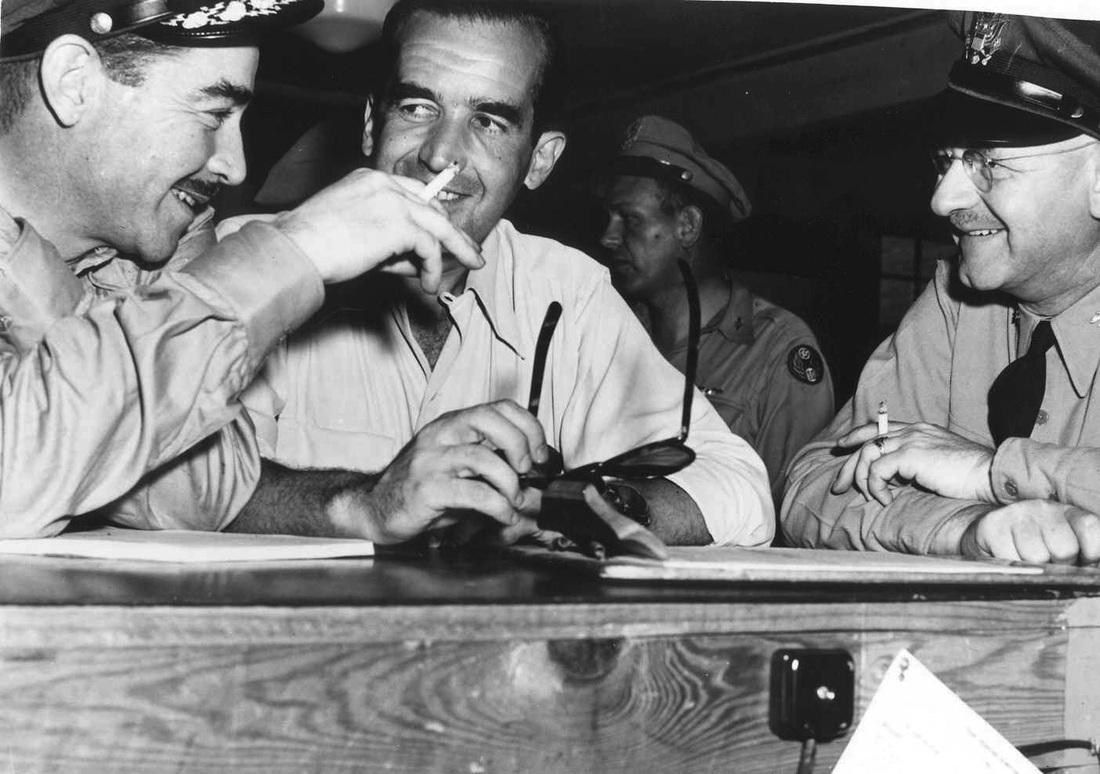 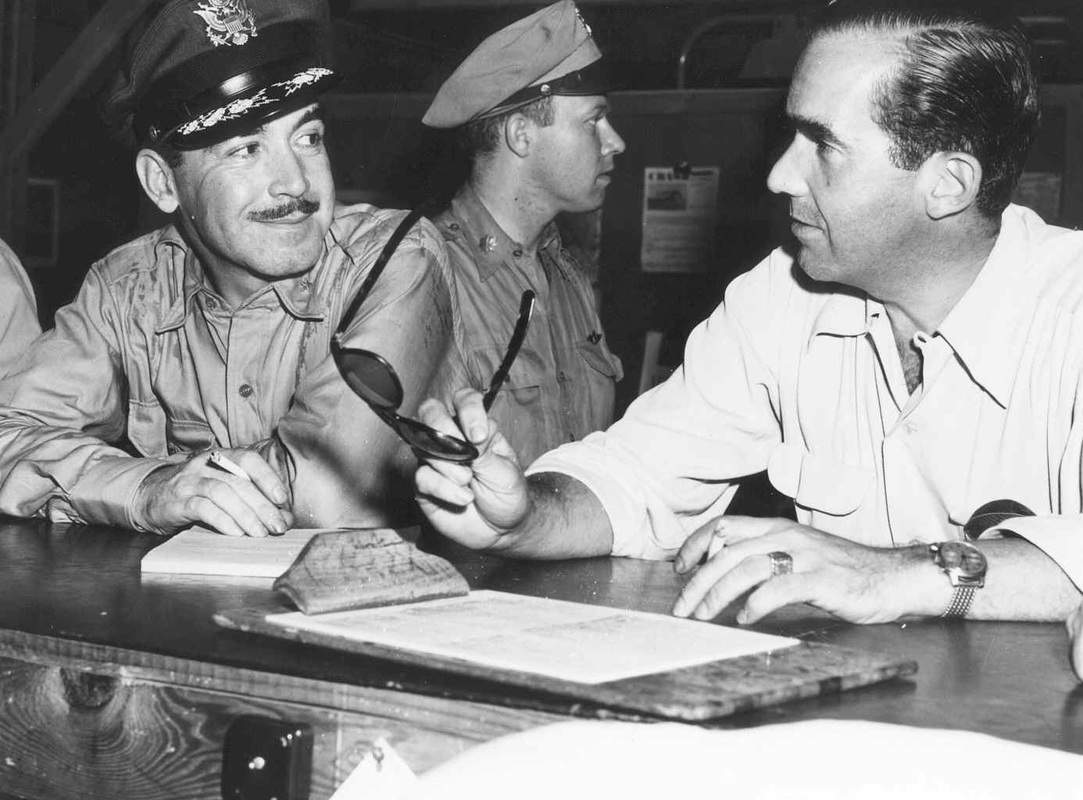 BG Murrow and Edward R. Murrow with an unknown officer in the background. LTC Cloud and Colonel Ronan were at one time, Atterbury Air Base commanders. 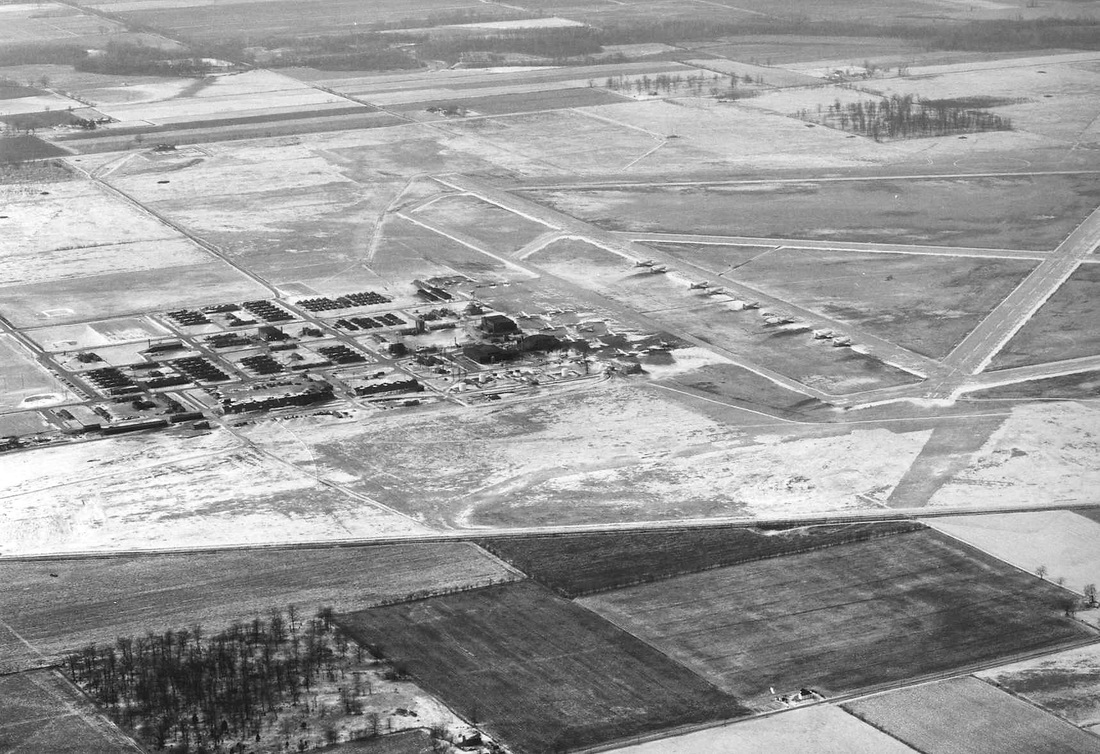 December 1955 air photo of Bakalar Air Force Base. Note the C-46 aircraft on the ramp. If you notice the rail road tracks near the bottom of the photographs, these are the ones that the C-46 crash landed on pictured at the top of this page. 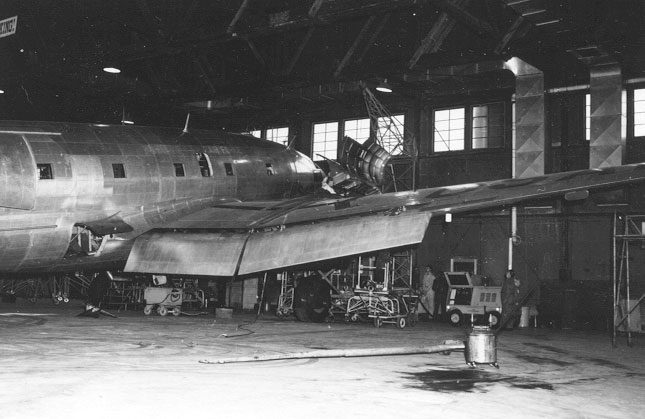 Building T-93 Hanger with a 434th C-46 inside
These C-46 photographs are from the Atterbury-Bakalar Air Museum historical files but are not currently identified as from the former air base. Can you help us identify the people, location, and dates? Also, can you identify the aircraft types in the background of the first photograph. There is an AT-6 and other types. 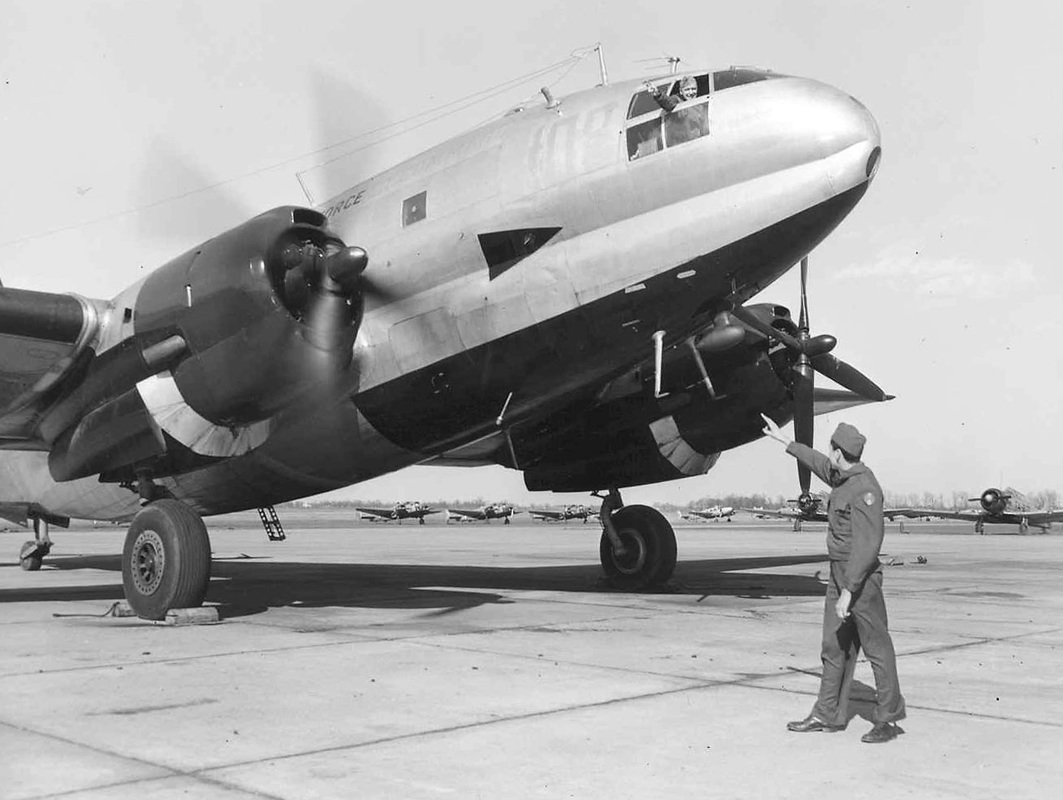 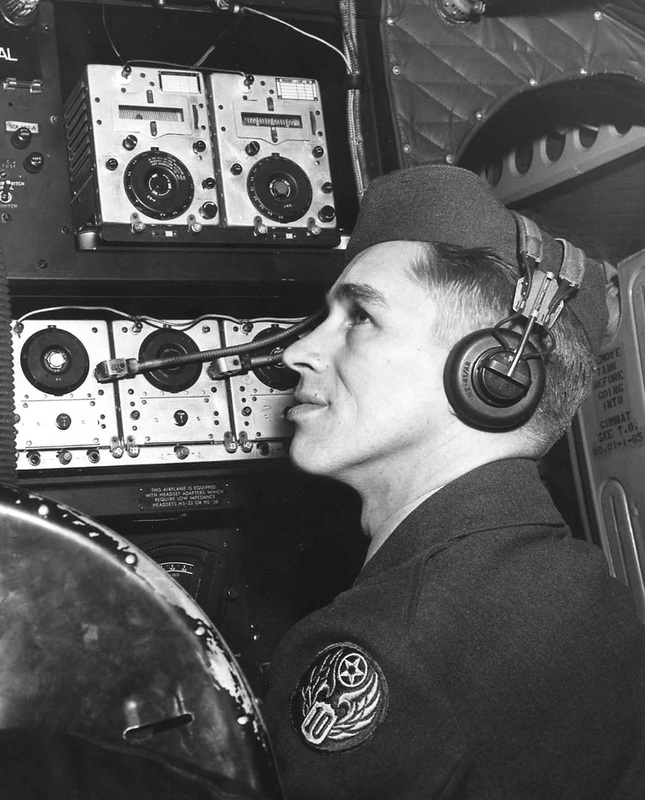 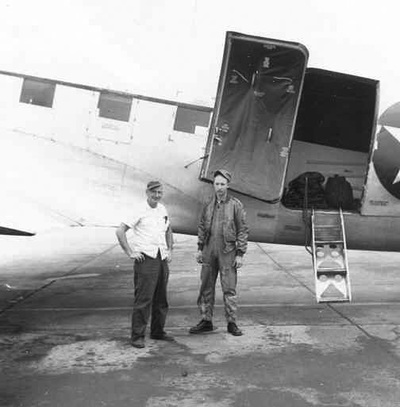 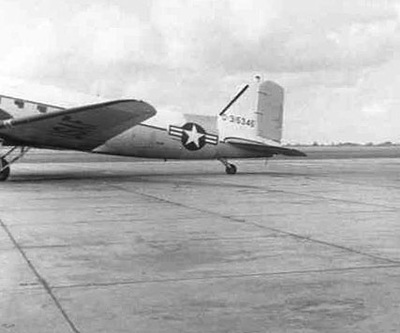 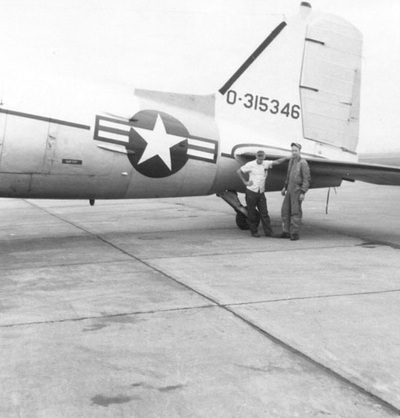 Mathis & Boyles at the cargo door, Tail view of a C-47 on the ramp at Bakalar Air Force Base,  Fred Mathis and Boyles. and a C-47
There were two C-45 aircraft assigned to the air base according to former base staff. During the 1950s, 900 C-45s were rebuilt for the Air Force, received new serial number,s and were designated C-45Gs and C-45Hs. The C-45s were used for administrative and light cargo duties.  This is the military version of the Beechcraft Model 18. They had two Pratt & Whitney R-985, 450 hp engines, and a cruising speed of 150 mph. 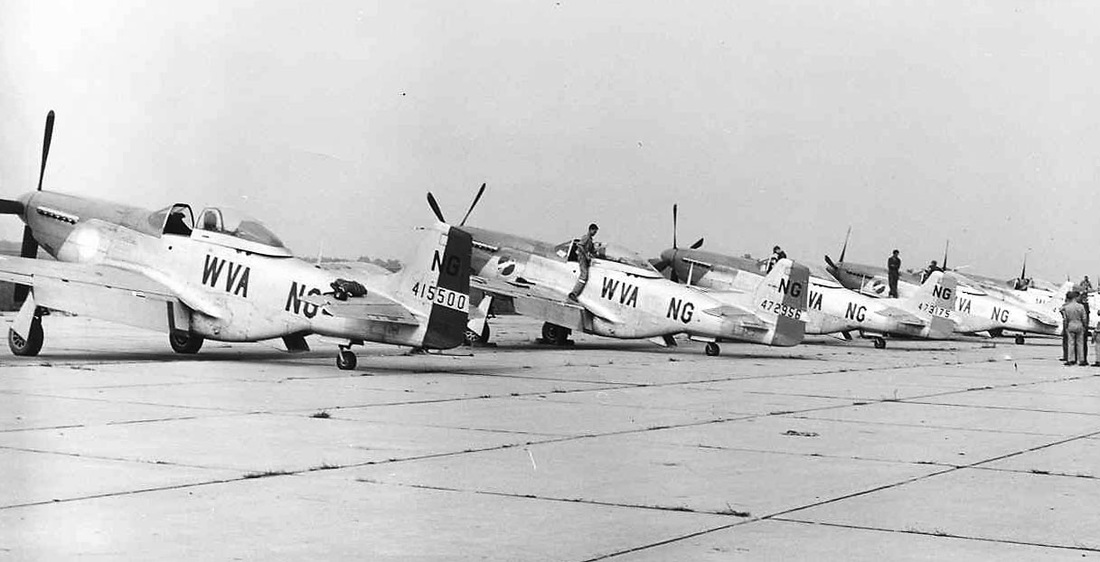 West Virginia Air National Guard P-51s of the 167th Fighter Squadron on the ramp at Atterbury Army Air Base during a training exercise.

From August 24 through September 4, 1948, the 167th Fighter Squadron held their first field training at Atterbury Army Air Base, Columbus, Indiana. The 167th Kentucky and West Virginia Air National Guard and the West Virginia detachment of the 223rd Air Service Group attended this training. 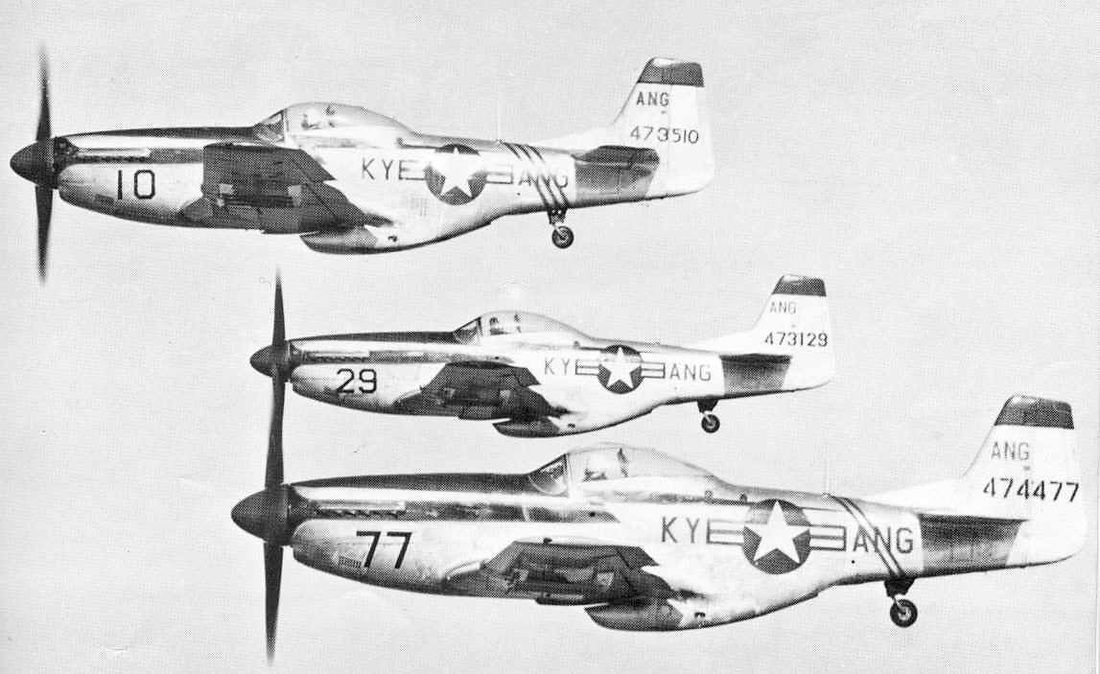 F-51s from the 123 Fighter Group that trained at Atterbury Army Air Field during the summer of 1948. Museum Volunteer Ernie Schorr was an F-51 pilot and F86 Sabre Jet pilot with the Kentucky Air National Guard after his service as a P-47 fighter pilot during WWII.

Here are some articles from the May 27, 1957 The Wing Script newspaper published by the 2466th  Air Reserve Flying Center, Bakalar Air Force Base. Copies of this publication are very rare.